This is the one and only proper place for trip reports. Let us know what you saw, where you saw it and such.

I know this does not have to do with the Fort Wayne area but I thought you all may be interested.

I got a call late Sunday afternoon from a friend of mine, he told me that 6936 was coming through on the UP’s “Overland” route to Chicago. For a minute I had to think…6936…then it hit me…that’s the Centennial!! There was no way I was about to miss the worlds largest diesel locomotive in action! Classified as a DDA40X, the “Centennials” where the longest diesel locomotives ever built at nearly 100’ long! The DDA40X’s power plant generates 6,600 horsepower, more than any other single diesel locomotive ever built.

Well, enough with the statistics, and on with the Trip Report. After I finished talking with my friend, my family and I made plans to head for Rochelle for the day. 6936 was coming back from Chicago on 3-21-2007 with nine Union Pacific business cars including a Vista Dome! 6936 was on train SCHCB, this train was the highest priority on the railroad, even the highest priority intermodal or “Z” trains where held in sidings for this train!! The trains max speed was 75 MPH, and that’s what 6936, and I believe it! After hearing this, I knew that this was going to be a one shot deal…we would be unable to chase it. She was scheduled to leave Chicago at 8:31 a.m. on March 21st, 2007. On the 21st we got down to the railroad park early, sadly, it was cloudy and looked as if it could rain any time! I called my friends in the area to see if she was still on time, and oh was she ever, actually about an hour early!

About a half hour after we arrived at the railroad park I could hear the faint sound the 6936’s unmistakable air horn off in the distance! Tension was high…I think everyone else also knew that this was a one shot deal…and it was. A few minutes later we could hear the train crossing the grade crossing outside Rochelle, I got my cameras ready and my video camera, just before 6936 came into view it started raining, so I moved my video camera inside the platform and my mom manned it while I had the cameras.

The crossing gates started going down at the 9th St. crossing, 6936 was only seconds away, there she was…barreling through the crossing! I don’t think I stopped shooting until she was past me, then I turned and shot her rear. I tried to get photos of all of the cars, but she was moving so fast that it was hard to do. I am realty amazed how good the photos turned out seeing how dark and rainy it was that day. But they did!

We tried to chase her, but she was already out of sight! So we turned around and headed back to the railroad park. Freight traffic was just starting to pass once again after being held in the siding for the SCHCB.

We spent the rest of the day at the railroad park, UP 1995 (CNW Heritage) and the two remaining CNW C44-9W’s were scheduled to leave Chicago at 9:30 a.m., so while I waited to see them traffic on the BNSF picked up with two ore trains, one EB and one WB. Power consisted of Dash-9’s, SD60M’s, EMDX SD60’s, one of the trains even had a rear-end helper! Now something you see in Rochelle on the BNSF.

Finally, the CNW trio arrived, and what a treat it was, they stopped UP 1995- CNW 8646-CNW 8701, right before the signal in front of the railroad park, allowing me to get every angle of the trio! What an interesting day already.

Shortly before we left we had another surprise, here comes two UP SD40-2’s, a GP38-2…followed by four SD70ACe’s in primer. If that was not enough action, a huge thunder storm moved in, as the primer units passed there was a huge crash of thunder literally right over the shelter, at that point we decided to leave. As we crossed over the BNSF tracks on 9th St. I noticed something wrong...the signals protecting the diamond where dark!! The storm had knocked out the signals! Amazingly, BNSF trains still passed over the UP with no signals!

What a day…so much action in so little time! On our way home we stopped in Mendota, IL. for a few minutes…while there I caught a rare beast…an ex-Santa Fe SD45-2! She was mixed in with five BNSF H2 C44-9W’s…a considerable amount of horsepower for such a train in Illinois.

After our little stop in Mendota we highballed for home…

Look below for photos: 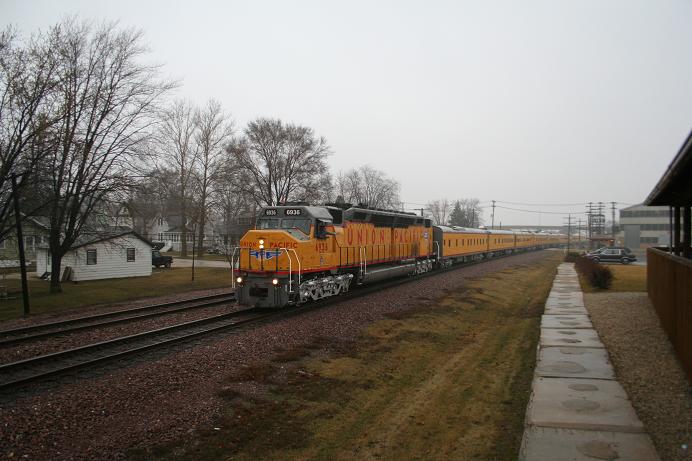 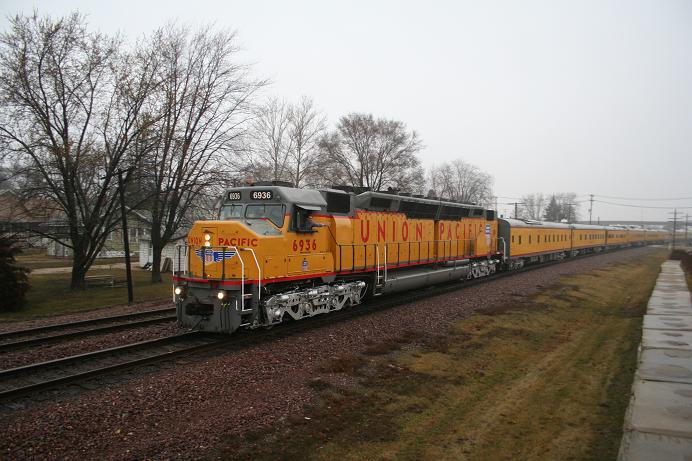 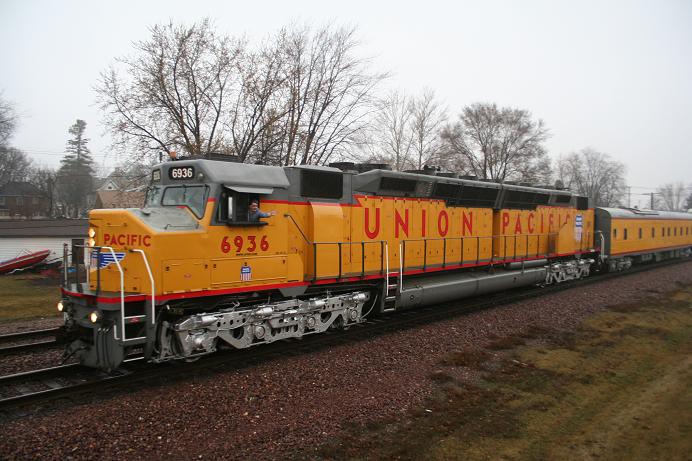 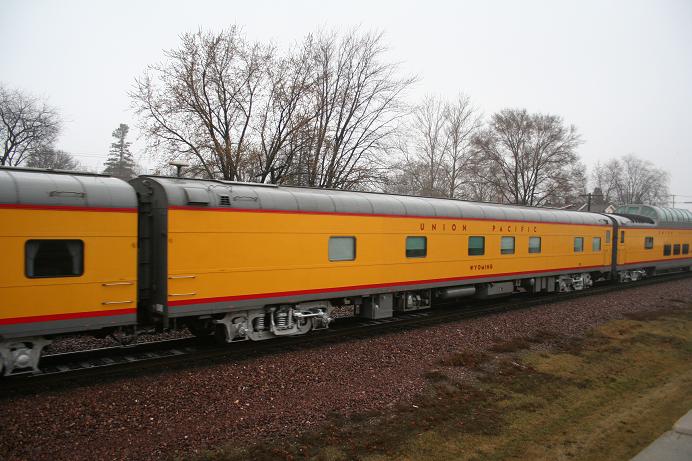 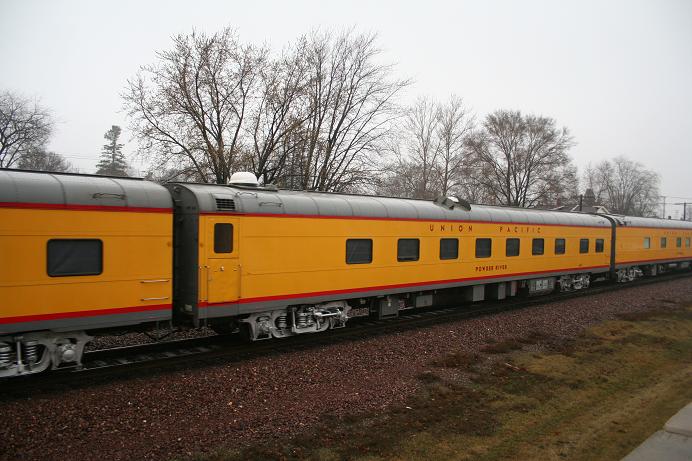 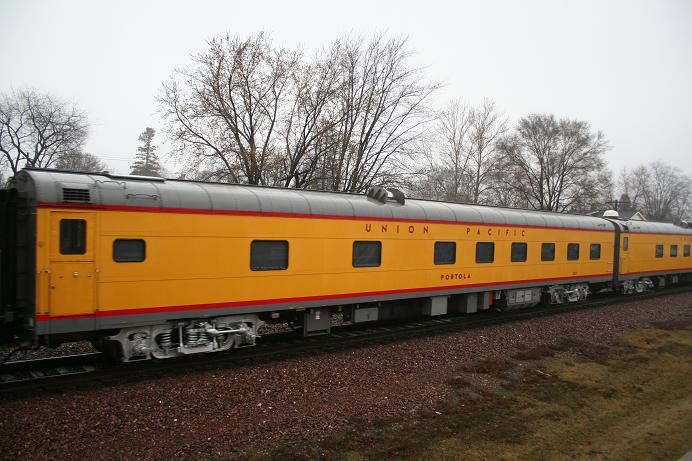 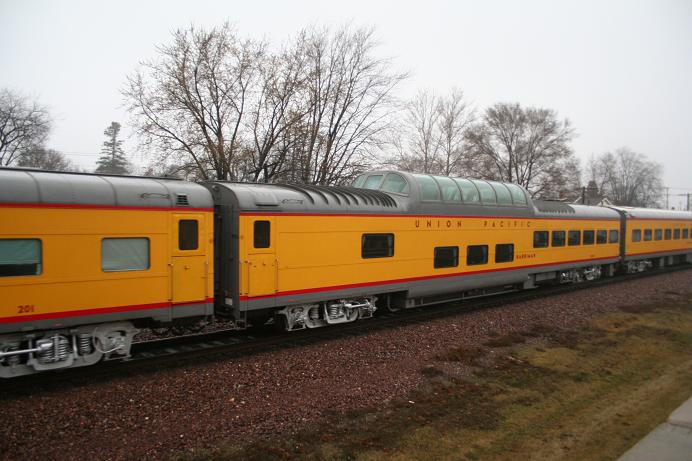 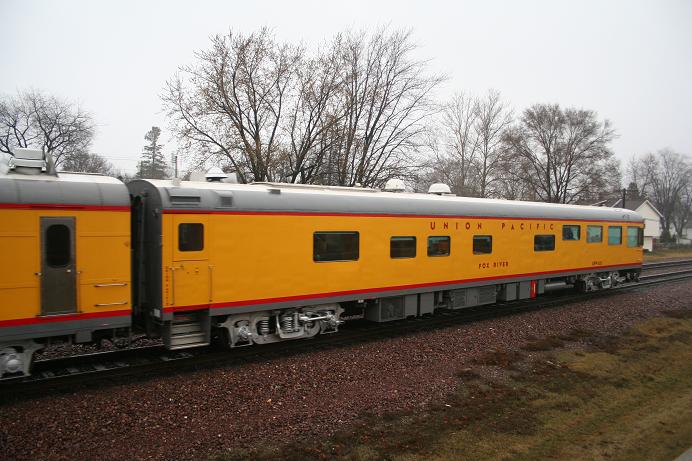 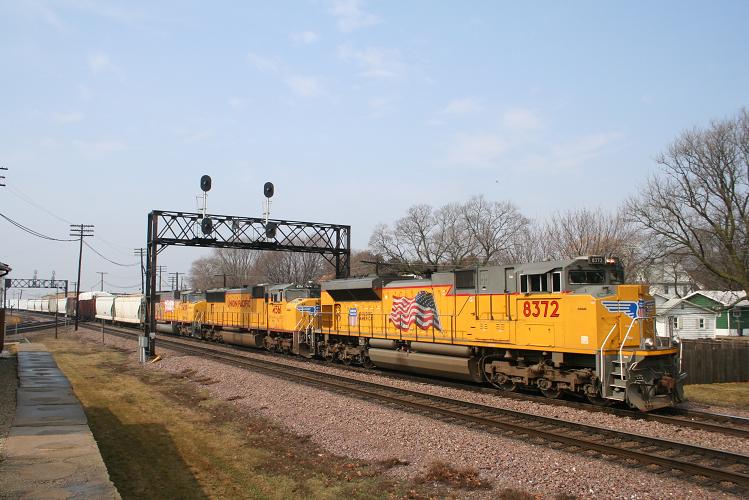 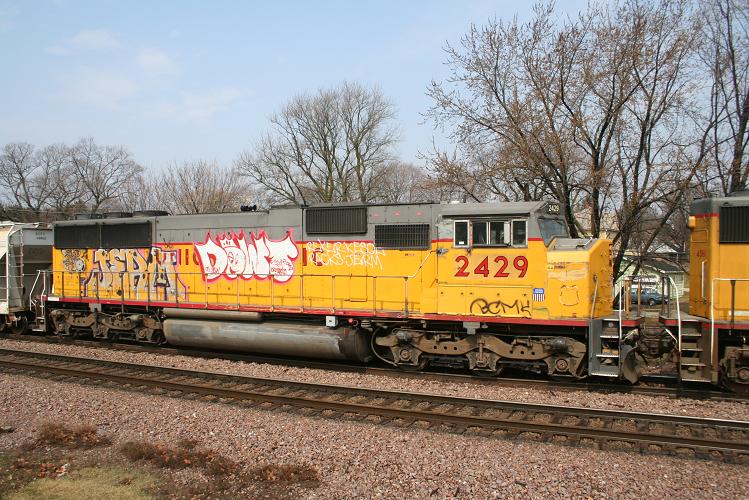 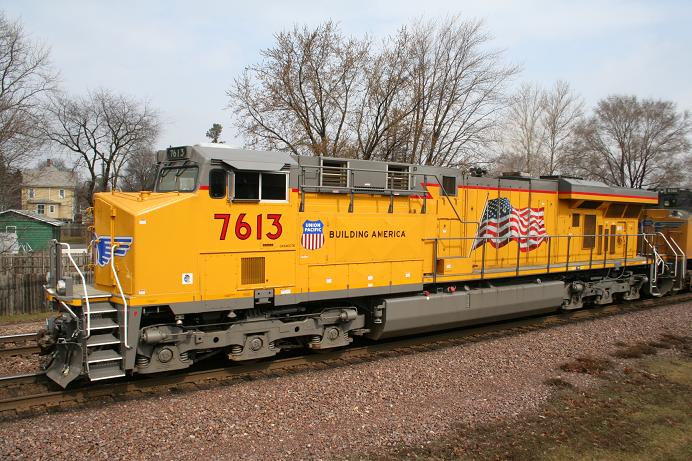 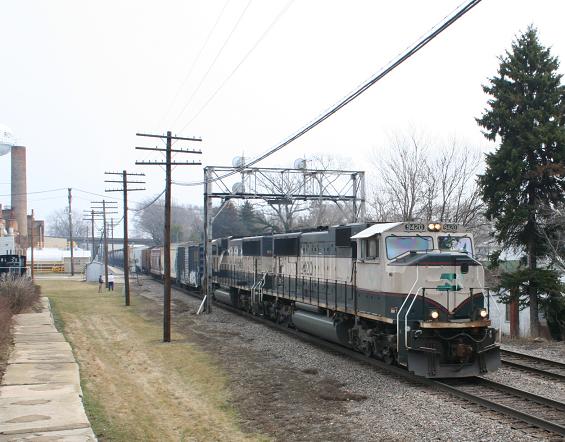 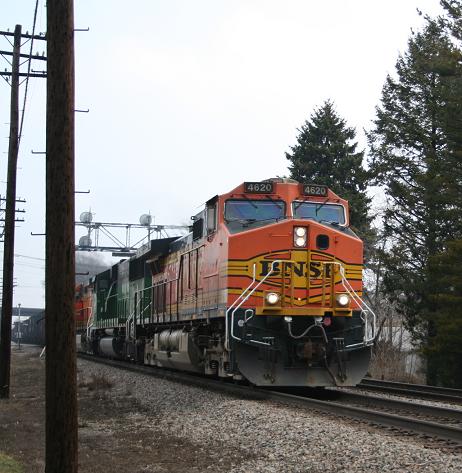 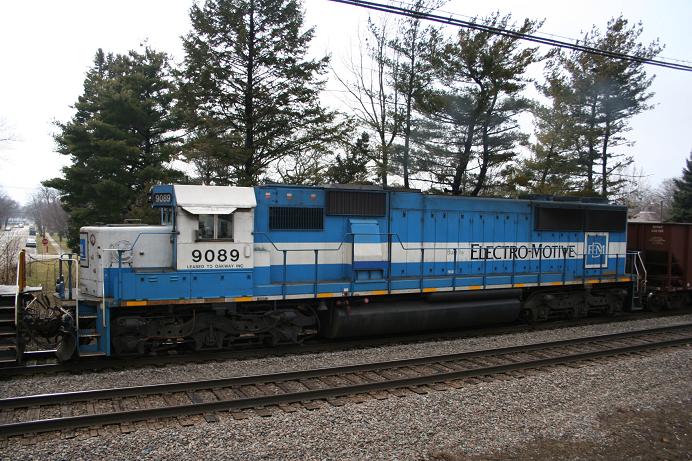 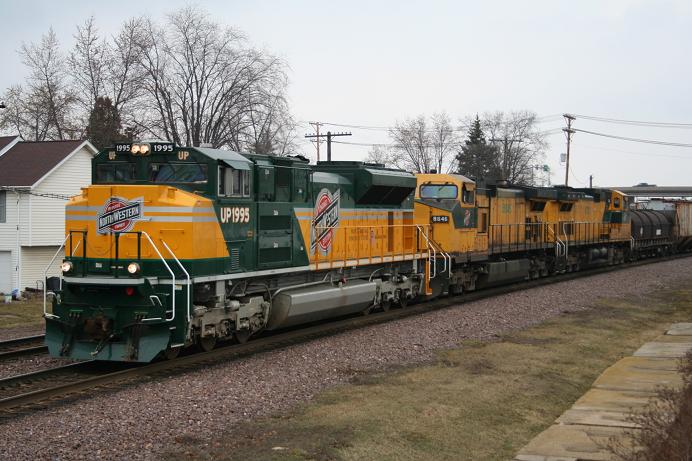 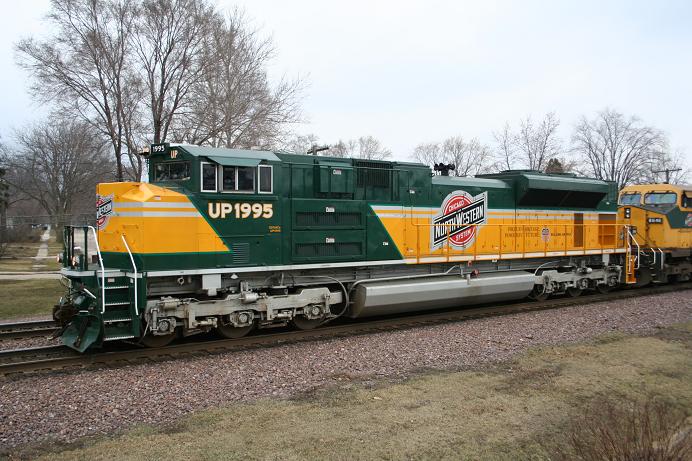 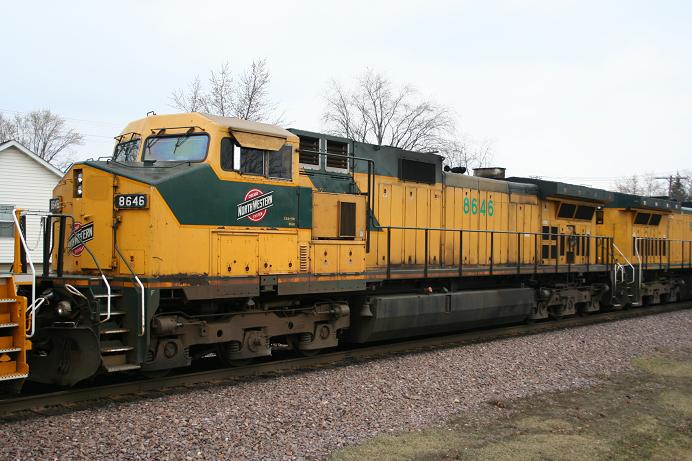 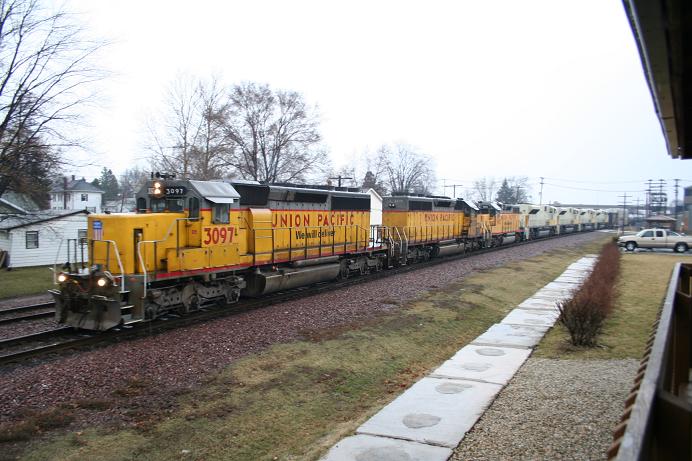 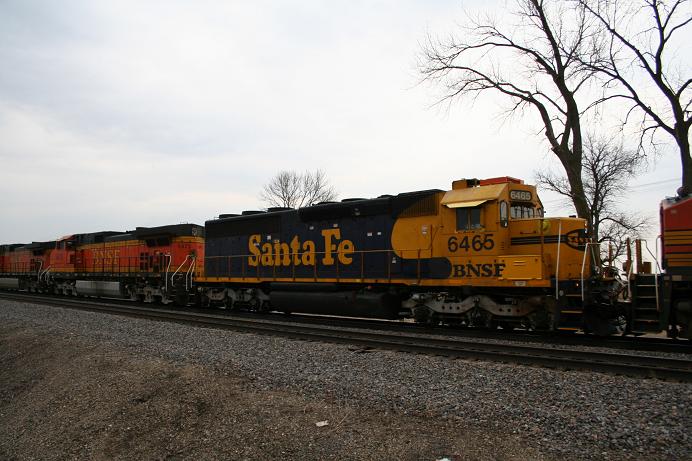 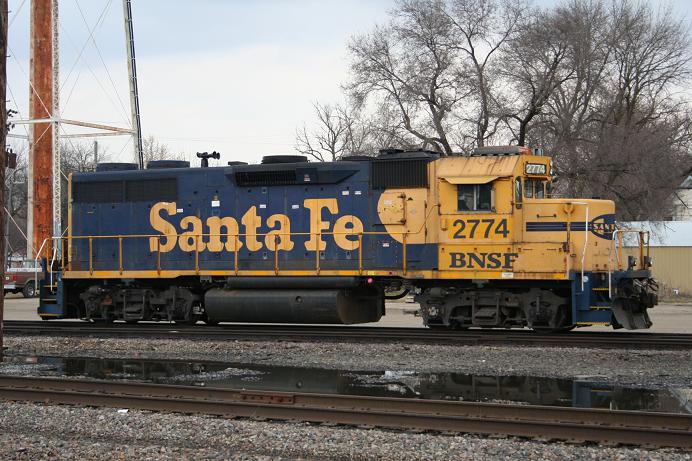 Thanks for reading and I hope you enjoyed!

Great post. All the pictures turned out great! Keep it up
Top

Well, the DD wasn't REALLY a single engine. It's really just two SD40-2's welded together, power wise. It has two seperate prime movers. But it's one piece, so I guess you can call it however you want.

Nice trip though, the Centennial and the CNW 1995 in the same trip.
Greg Lavoie - Webmaster
Top

I remember the first time I saw 6936, pulling an officer's special down the C&EI through Watseka and Woodland Jct back in '01. The only thing I could think of to describe it was "BIG!"

Home away from home

You made M.M. 's and my day. BTW, the bro-in -law who lives in Dekalb tells me that UP is also planning to do track work on their line there along w/the work being done through there on the BNSF.
Top

Does NS have any of those 'centenials'?
Top

D.L. Thanks for the comment! Yes, you are correct, UP is replacing Main 1 (north track) through De Kalb and Rochelle starting late May for De Kalb and from June 2nd - the 9th in Rochelle. They are replacing the old wooden ties with concrete ones and laying new welded rail. However, BNSF will not be doing any track work in the area at that time.

For more information and to keep up to date visit out message board, click on the link in my sig below.

NS does not (and never did) own any of the DDA40X locomotives. Union Pacific is the only railroad to buy them, there was a total of 47 built, all for UP.

Thanks for the comments and questions!

My very good friend owns the engineless #6926. If you are ever in Chamberlain,SD stop in at the Dakota Southern and he will give you the tour.

It was great fun that day, Rochelle is like a second home to me, great place!

And Greg, just to clear something up, I never specified what type of units where combined to create the DDA40X. Second, I never said that it was one giant 6,600 HP diesel engine, I said it was the largest diesel locomotive ever built, not the largest prime mover. I just wanted to clear that up.