Interesting that the triangle of land north of Illinois road shows being owned by the lake Erie & Western RY. One has to wonder why and how they would come to own that particular property.

Interesting neighborhood, to say the least (1924) 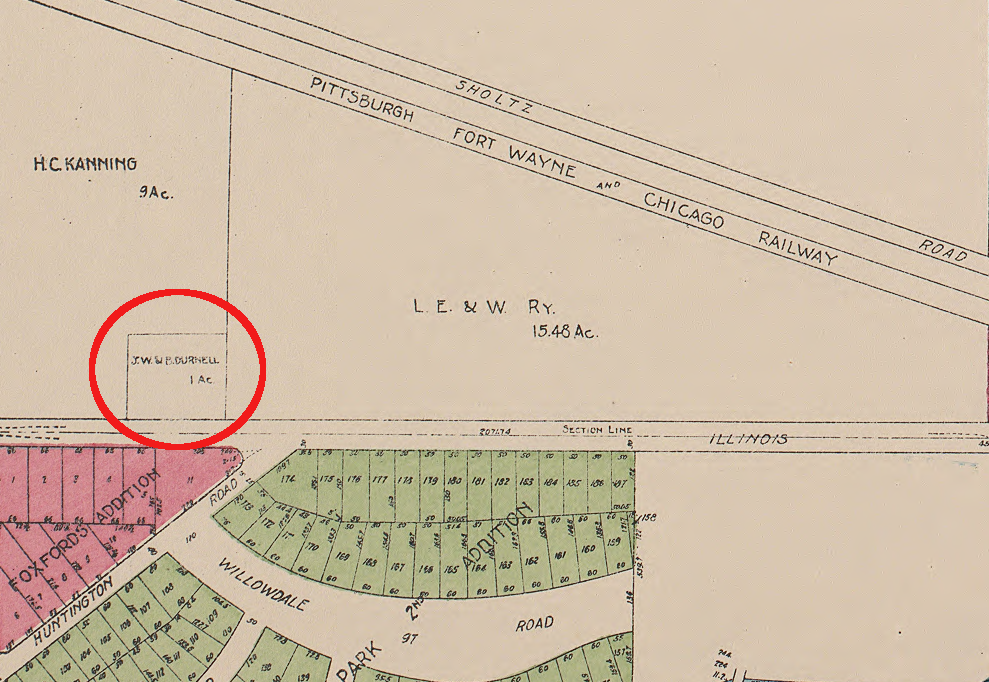 VERY INTERESTING... I THINK I know who this was. My grandfather, who was born in 1911 use to talk about visiting a relative, (I believe an uncle) that owned a gas station at what he called the "Bootjack", which was where Illinois Road splits off from Jefferson, now generally referred to as "Park West". I always was led to believe that the location of the station was on the point where the current Lassus Bros. station is, BUT, I wonder if it wasn't really on the north side of Illinois Road. My leg of the Durnell family came over from England in the 1880's 1890's and my great great grandfather owned a farm on the east side of Hadley Road Between Covington and Illinois Road, hence the naming of Durnell Ditch that runs through that area. I believe that my great grandfather came over with his parents, but later returned to England, got married and had five kids there. He then came back to Fort Wayne circa 1905 and had six more kids, five of which lived to adulthood. My grandfather was the ninth of eleven, and was born in a house at Oxford and Wayne Trace, but later lived on the west end of Raymond Street. For a short time he ran a Shell station that was basically right next to the Piqua Yard tower on Pontiac Street. I will ask my Mom, who is the unofficial family historian about this relative who owned the land on Illinois Road.
If my opinions offend you, you should see the ones I keep to myself........
Top

Glad to be of service.

To be truthful, when I first saw this map (only just recently in fact), I just figured your earlier curiosity was "tongue in cheek", that you were only asking about the location because you already knew the answer. So I figured I was "calling" you...

You are lucky to still have an elder you can ask questions of. Back when I had that opportunity, I was too stupid and self absorbed to even care about "ancient history". Of course only now that I am older do I even know the questions that I should have asked,...etc
Top

At the below link is a fairy large map of the southern half of Fort Wayne, used to chart out enumeration districts for the 1940 census. Some descriptor I saw at the census site said the actual map was from a 1938 vintage. Which of course makes it interesting because that coincides with the 1938 aerial photos available through IHAPI.

One thing that keys into discussion we were having here, is the tract of land on west Taylor that eventually became the supercharger plant is listed as belonging to General Electric.....well before the war.


Hopefully this post will get through the evil Spamhaus Barrier.....just because we get through one day does NOT mean it is fixed. I still get barricaded out far more than I can get through
Top

Anyone having difficulty seeing the 1940 map in it's full size, can click on the link, and then when the limited size image appears, right-click on it and select either "open in new window/tab" or "save as", and either choice should produce a full sized image.

I found it interesting the way the property all along the PRR between Wall street and the railroad is listed as "General Electric" (Eventually occupied by Essex). In fact if one looks at city directories over the years, you will find many recognizable FW industries listed as occupying smallish buildings along that strip. Perhaps it was a popular trans-load location for businesses needing rail siding access, who then trucked their lading to their off-rail facilities?

The arched shaped roadway at the east end on the 1940 map interested me too, arching between the east end of Maumee ave, and New Haven ave at Bueter rd. (through where the cloverleaf sits today). This being the way that US 24 & 30 doglegged over on their way through New Haven.

There is also a 1950 map at the US census site, depicting how the Circumurban highway was originally designed to cross the river and join Meyer Rd instead of how currently configured
Top
Post Reply
49 posts