Official message board for the greater Ft Wayne area.
http://www.fwarailfan.net/community/ 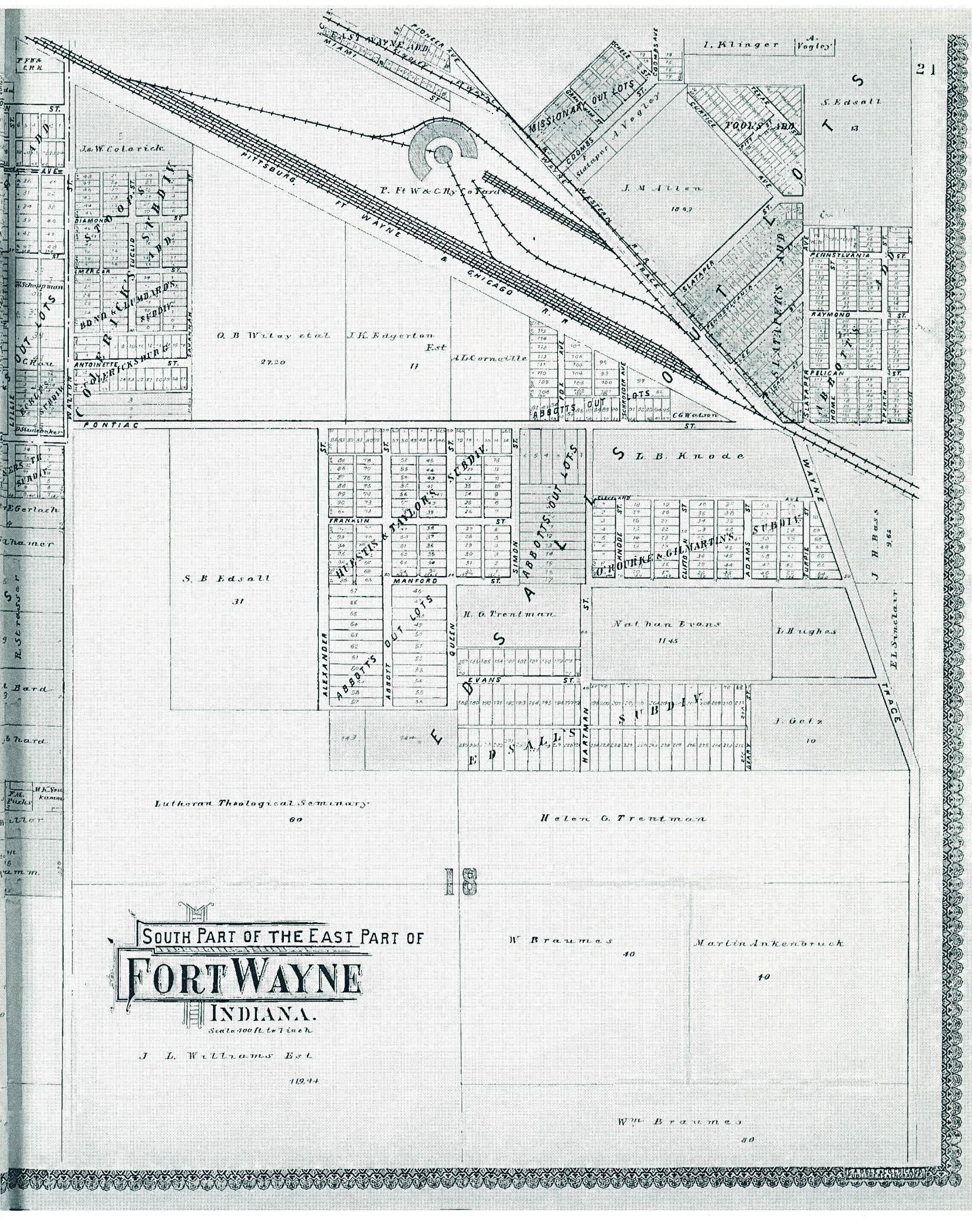 by Hotbox
Abd here is a portion of the 1898 map that likely no one but me even cares about. Look at the narrow strip of land attributed to "J.R. Godfrey" at the red arrow. Just a strip of land spanning between the St Mary's river and Brooklyn ave. I was surprised to find it here.

JR Godfrey's name comes up regular in context with the Richardville reserves, I think he was like Richardsville's son in law or similar?
I know that many of the reserves set up both in the area of the old Brudy's gravel pit, and for Lagro up in the Cranberry area, was kept for them because of access to the portage/passage between the two major watersheds hereabouts.
I'm wondering about the strip here in question, and what relevance it might have.

I know that when City Utilities has the Maumee dam open....AND we have been through a significant drought, navigating the St Mary's much further south from this point is problematic, perhaps that's it? 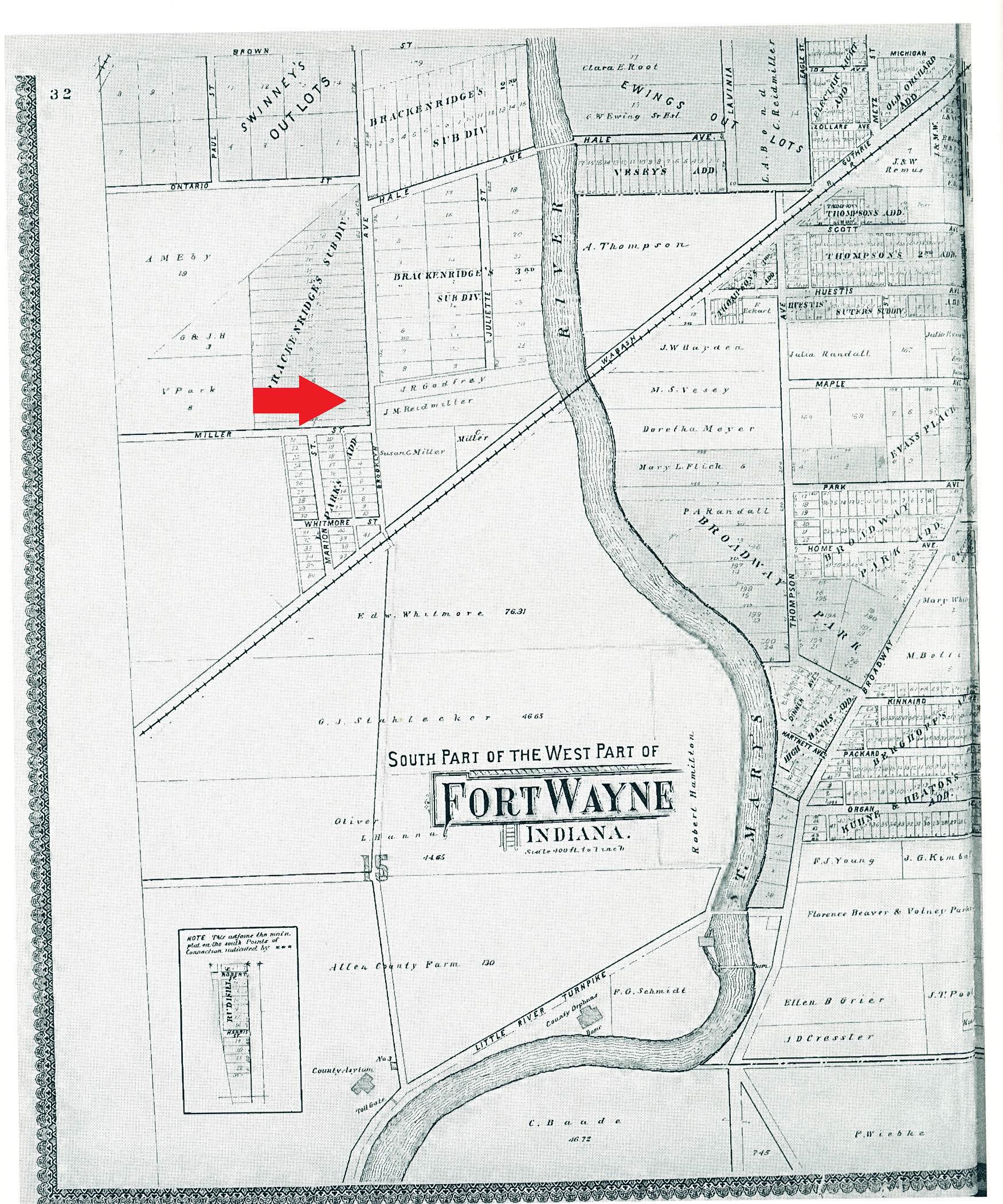 by Hotbox
Okay, I managed to compress the 1876 Allen County map down to only 3.5 MB

For best results follow the link directly to the image, click on image there to enlarge
Lots of different names on things we call differently today.
This map seems to reflect the original waterways fairly accurately, the way things were before the drainage ditches were dug. In particular the stream through Richardsville's property dumping into the St Marys river. That stream's source is all the way over to where Ardmore avenue is today, and would be a very short portage to the Little river. 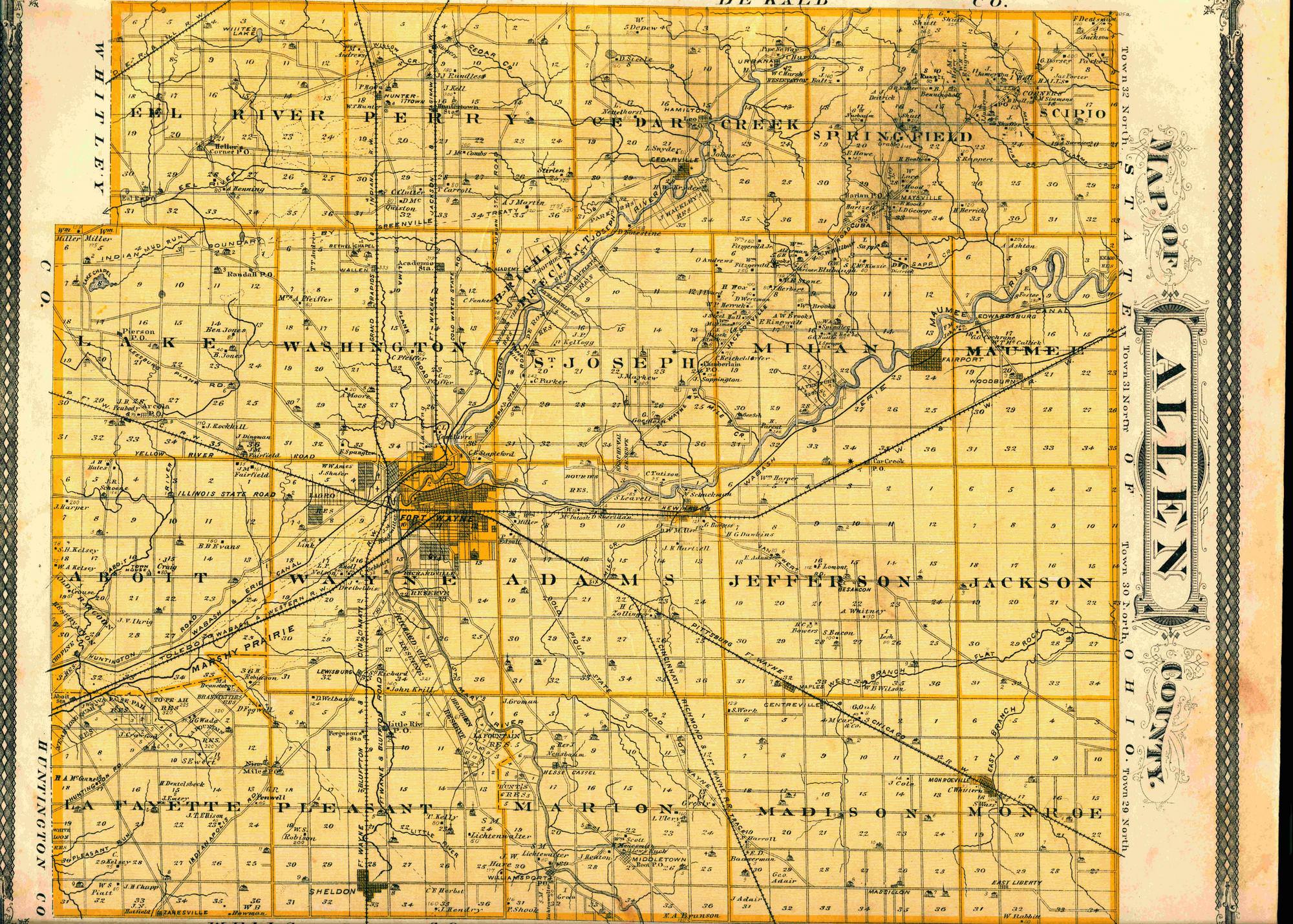 by Bob Durnell
I just found another interesting (to me) tidbit. If you look at map 12 from the 1924 map book, referenced above, you will see that there was a street north of Taylor through the heart of the GE complex, the property between that street and the PRR tracks is listed as belonging to GE in 1924. I thought that entire facility was built during WWII. Does anybody know what if anything GE had on that property prior to WWII?

by Hotbox
Here is a portion of the 1938 aerial photos, showing that lot. Note how the known structures around this property are casting shadows. It doesn't appear that there is much built-out on the lot in question (few shadows) 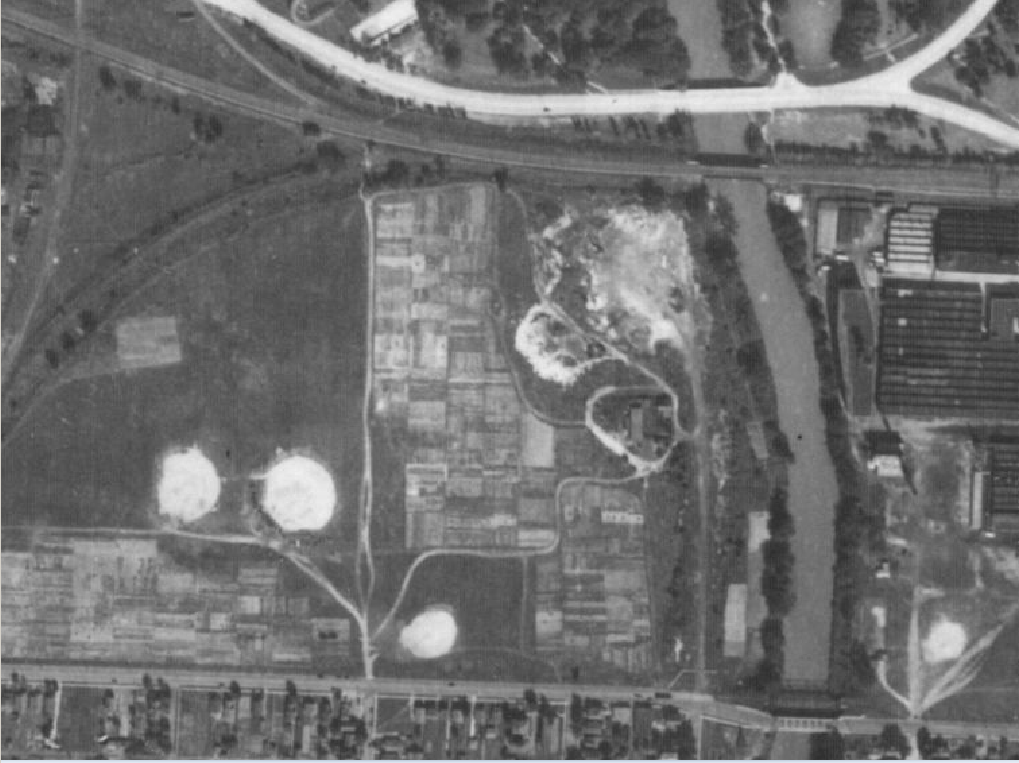 by Bob Durnell
Interesting that the 1938 aerial photo bares little to no resemblance to the 1924 map. Meadow Street seems to have disappeared, along with the extensions of Brooklyn Avenue and Paul Street to meet it. There is also no discernible evidence of the lots between Taylor and Meadow. I wonder if perhaps GE had purchased this property sometime after 1924 and cleared it for future use by the time the aerial photo was taken? If I have my GE history right, GE Taylor Street was built to manufacture aircraft engine superchargers, a product the I don't believe GE was involved with before the war. So, IF they acquired this property to build another plant in the 1920's or 1930's, one would have to guess they had a different product in mind.

by Hotbox
Just a couple of off-the-cuff observations. If you look at the "proposed drive" that parallels the St Marys, note that the outline of this feature is a dotted line. So too is "Meadow Street". It's possible that both were planned and never materialized. You know how developers try to get everybody on-board with their vision. Perhaps Meadow street was a first step hoping to get people excited that things were about to happen?

Just speculating mind you.
Also speculating, but often the owner of a property and the user are not one and the same. Think of all the railroad "companies" that were not common carriers, but rather built lines, only to then rent them out to an actual common carrier, .....sure the original developer might be listed in the title books as the owner, but that's relatively meaningless (from a railfan's perspective) if some other firm's crews and equipment are the ones operating it.

Possibly this could be what's going on with the GE lot we are contemplating? Possibly GE never bought the land with specific intent....could be that the land in question belonged to the entity that owned the rest of the property that GE acquired? A "package deal" in otherwords.

"Room to expand" is often touted as a plus for commercial property, and sometimes a deal killer when none is available.....before anyone gets too excited, I'll reiterate.....I am purely speculating.

by Hotbox
Just for comparison, here is the "key" for the 1919 Sanborns, and there is no trace of Meadow street at all

by Bob Durnell
You may be right. Perhaps I read too much into the 1924 map, although I wonder if Meadow was only a proposed street, why it isn't labeled at such, like the one along the river. Interesting, either way. Another thing that has always fascinated me in this area is how when the steel mill was expanded, basically a whole neighborhood just disappeared. 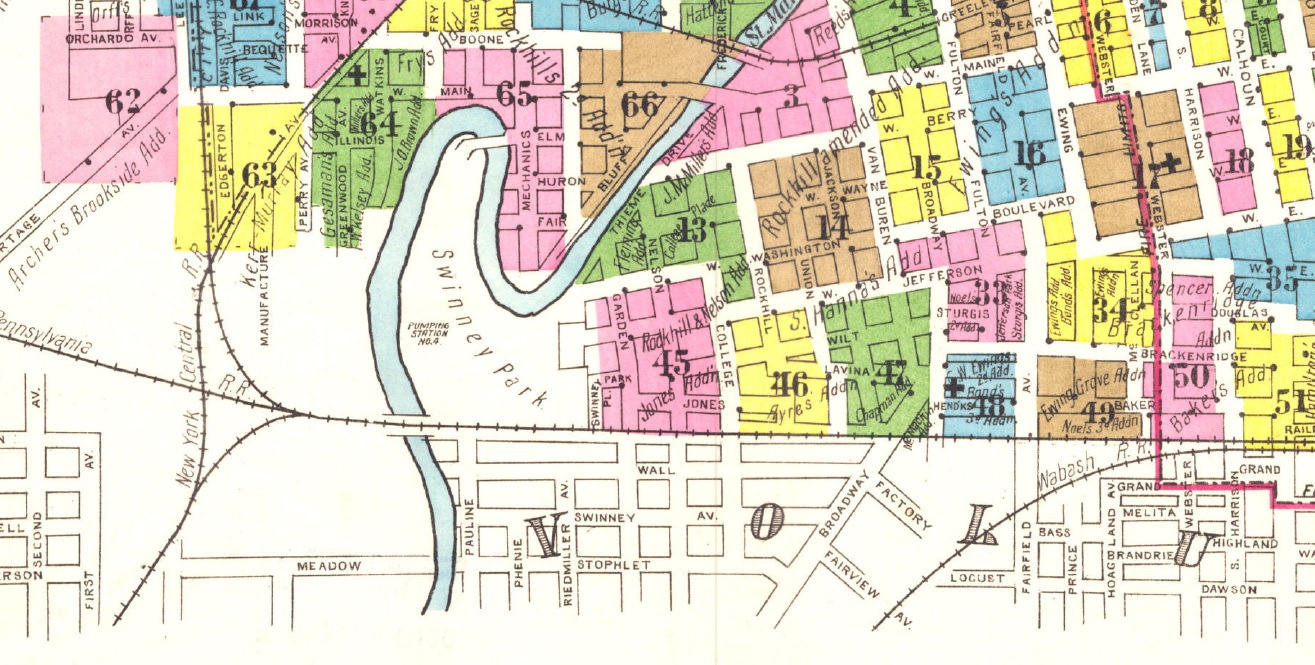 by rrnut282
Remember, when these maps were drawn up, they were literally drawn. By guys with BIG drafting tables, by hand. It took years for them to be completed, as they had to calculate and scale every line, by hand with no hand calculator. There was plenty of time for plans to change, or property to change hands. Making revisions was not something taken lightly. Not only do you have to change the original paper drawing, but you have to re-do the metal printing block or cut new screens to make paper copies. There was no two clicks of the mouse and it's fixed like we have today. So some details on the margin and not in the area the "key" represents would not justify the effort to update.

The preceding is opinion only, based on experience in creating maps and surveys. I wasn't there, and I doubt anyone else here was, either.

by Hotbox
Good points. I also noticed that "Meadow street" is shown in the 1898 city of fort wayne map. Made me wonder if perhaps it existed, but was never paved? I'm sure there were at least a few dirt streets in Fort Wayne back in that period.

I recall seeing an Indiana state map vintage 1910 or so that showed the route we now know as US 24 (Huntington road) was dirt between Roanoke and Huntington.

Could be that any plans to pave Meadow street were shelved when GE acquired the property?

by cjberndt
As to GE's land west of the St. Mary's River:

In Feb. 1932, GE replatted Swinney's land north of Taylor St. as General Electric Company Lot No. 6. Taylor St. had been platted or dedicated long before then. 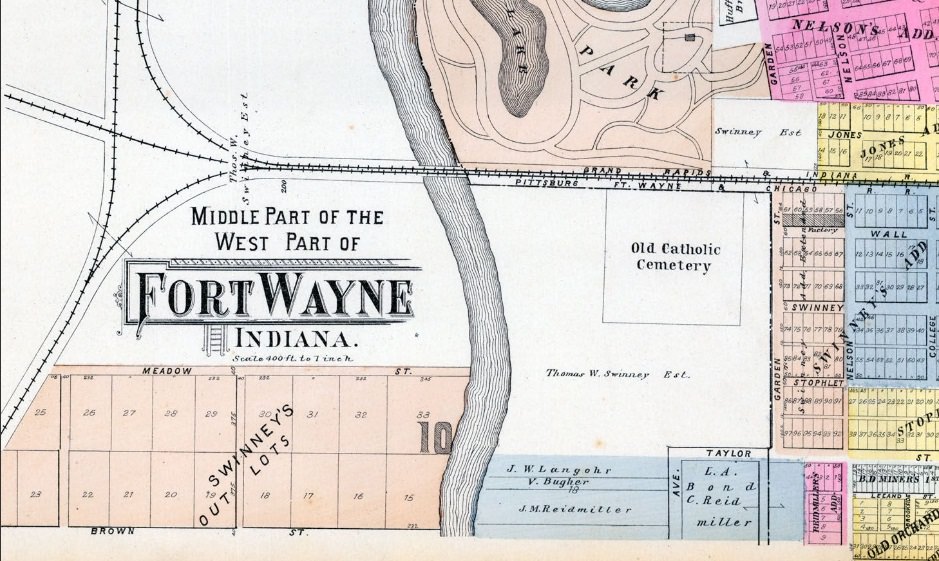 by Bob Durnell
So Essex Wire sits on top of an old Catholic cemetery? Where was the closest Catholic Church? Brooklyn and Hale would be the closest one I can think of, and I know the current church was built mid-20th century, but I don't know how long there has been a church there. I wonder where the bodies were moved to? It is my understanding that George Jacobs built his magnet wire plant smack dab where the cemetery was in 1912. I wonder if the cemetery was moved before that? Jacob's Dudlo plant was a pretty small operation to start with, I wouldn't think big enough that they would have moved a cemetery for it, so my guess is that it happened earlier, and one wonders why. LOT'S of great questions and a few great answers. Thanks for posting these maps. I LOVE them.
All times are UTC-06:00
Page 2 of 3
Powered by phpBB® Forum Software © phpBB Limited
https://www.phpbb.com/