Maybe I'm crazy, but as a small child in the early 70's, I'll swear there was still track in place on the LE&FW right of way at the Covington Road crossing, and that the track was removed perhaps in the mid-70's.
If my opinions offend you, you should see the ones I keep to myself........
Top

Bob, I think you are right. When I was in high school (69-71) there was an auto junk yard on the west side of the LE&FtW on the north side of Covington Road (Carter's?). I recall the track was still in place but was overgrown.
Top

Bob Durnell wrote: ↑
Tue Dec 11, 2018 3:05 pm
So Essex Wire sits on top of an old Catholic cemetery? Where was the closest Catholic Church? Brooklyn and Hale would be the closest one I can think of, and I know the current church was built mid-20th century, but I don't know how long there has been a church there. I wonder where the bodies were moved to? It is my understanding that George Jacobs built his magnet wire plant smack dab where the cemetery was in 1912. I wonder if the cemetery was moved before that?

Bob, the answers to your questions can be found here:

I used to own both volumes, incredible assembly of local history. It's been almost 10 years since I looked at those books, but as I recall the Catholic cemetery on wall street was not strictly tied to one church. When it was created I believe the Wall street location was actually outside the city limits ....I believe that it was eventually moved to the current Lake avenue location....not sure exactly when.

Also, If you look at the 1876 city map I posted earlier, you will see a cemetery on Broadway where McCulloch park now sits. That cemetery was moved...first to an area between Thompson ave and the St Mary's river.....near where Maple Ave intersects. Vesey eventually built his greenhouses at this site , then the graves were relocated again to a location "near Waynedale"....can't say for sure exactly where, but my best guess is on Old Trail road where Prairie Grove cemetery now sits.
Top

Hard for me to put an exact year on it, late, late 60's or early 70's. But I recall when there were still interchange tracks in the northwest quadrant of Hugo, feeding into the LE&FW.

At the time, Hugo tower was still standing, but vacant...and unsecure (*ahem*) They had one of those bulldozers that had a small boom out of one side, and some other miscellaneous equipment sitting on the ground overnight in the area where the interchange was. I guess that demolition was about to proceed.

As you might imagine, a couple of 10-12 year old boys finding all that cool stuff unattended, were quite entertained. Boy that tower would really shake when a freight would come barrelling by.

Earlier time period, I seem to recall a small windowed shed near the crossing on Taylor as well.......Looking at old City directories the LE&FW had a mailing address on Taylor, so that shed may very well have been their offices
Top

One would have thought that the part of the LE&FW down by Hugo would have lost all usefulness after the 1964 N&W merger, but maybe there were operational reasons to continue handling cars via Hugo instead of via West Wayne at least for awhile. You are right, there was a "shanty" there at Taylor Street that was the base of operations for the LE&FW. I have seen pictures of it AND it was shown in the N&W magazine article covering the LE&FW in the mid-70's when I believe there were three employees. When I was a kid, I remember the building and the N&W EMD SW type switcher that was based there. I wonder if it was one assigned switcher, or if they rotated them out?
If my opinions offend you, you should see the ones I keep to myself........
Top

We were talking in another thread about the old GE powwerhouse as was used before GE Taylor street started piping steam down the rail road right of way.

Following is a graphic reference to the prior plant extracted from the 1919 Sanborns. For reference, the Wabash roundhouse is located immediately to the right of this plant

In the media section, open this document and read pages 3 and 4 for the history of the LE&FW:

Somehow the document was entered about 5 times, but you can find pages 3 and 4.

The photo below was looking west on PRR from an Alco PA in 1949. GE's Taylor St. power plant is at center with 4 stacks. The buildings at left are Essex Wire and a box company (I think). The train at right is waiting for clearance to run on the main to the GR&I on the other side of the river.

Here's kind of a little oddity. From a Sanborn "update" map, some time in the 1940's or 50's I believe, notice that the Essex wire multi-story building is listed as occupied by "Crown Can Company". Wall street is an interesting subject all in it's own. If one pours over the city directories starting back in the 1920's thru the 1960's, it's amazing the companies you see listed as occupying the various buildings...General Electric, Interntional Harvester, Bowser, etc. Frequently flip-flopping from year to year at the same address. 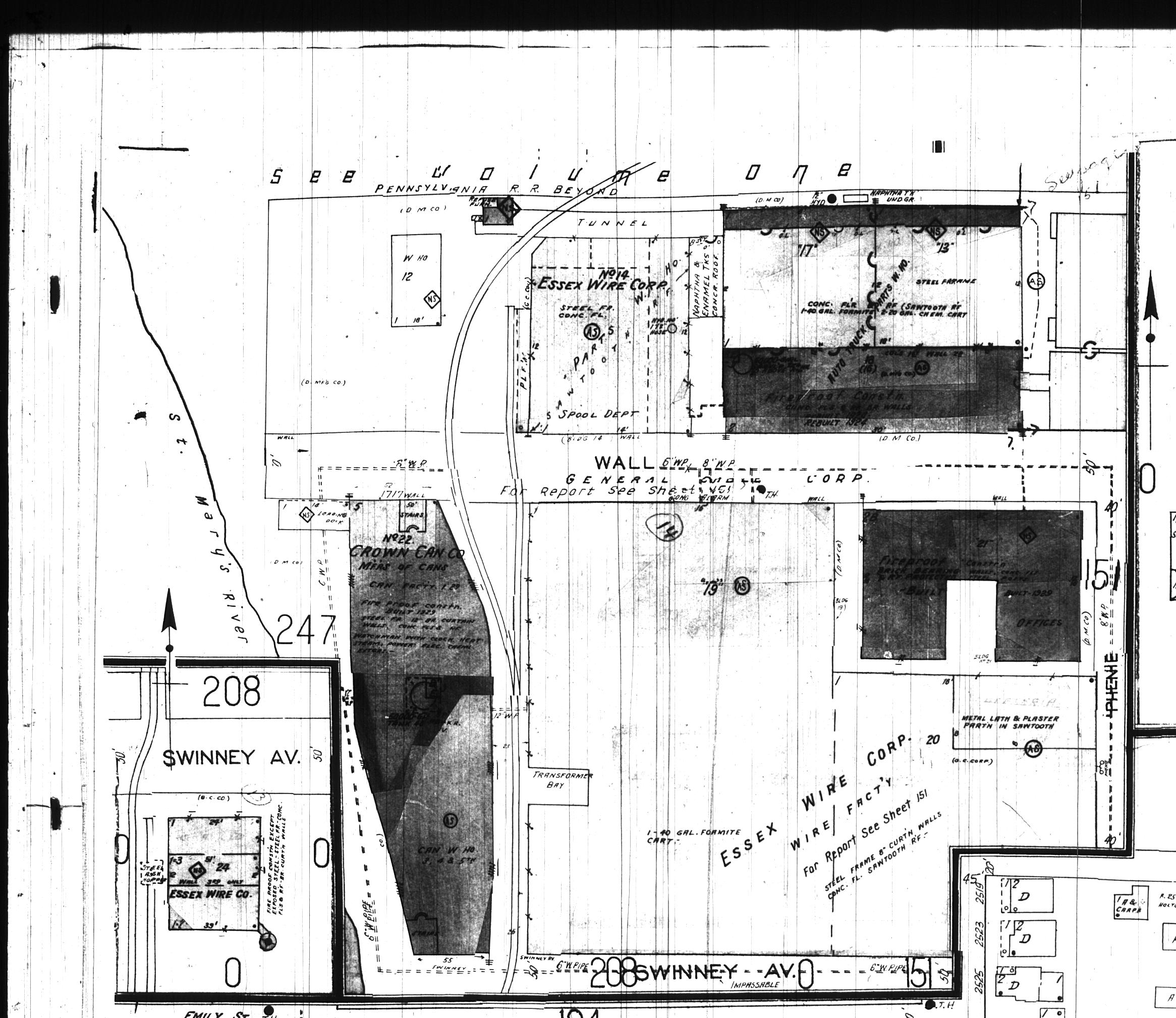 Hotbox wrote: ↑
Mon Dec 24, 2018 12:25 am
We were talking in another thread about the old GE powwerhouse as was used before GE Taylor street started piping steam down the rail road right of way.

Following is a graphic reference to the prior plant extracted from the 1919 Sanborns. For reference, the Wabash roundhouse is located immediately to the right of this plant

Just found this 1912 photo of GE depicting the powerhouse. View is looking north