FWA Audio - Behind the scenes

FWA Audio - Behind the scenes

I recently had to put a new server in place for the FWA feed because the former one was actually the most powerful CPU in the house and I thought it wasteful to use it as a server. It is now my main desktop computer. So after finding another computer that had stereo audio input, I got the new server setup and going. Actually after I turned it on I realized the computer was completely setup and ready to be put in place in Wellsboro back when we were looking at a setup there as well. The network connection gave me fits for about 2 days though, in case anyone was wondering why it wasn't up Friday or Saturday. But today I got the bugs ironed out and everything is back to normal so I wanted to take a chance to show everybody just what it takes to bring the FWA rail stream into your house.

First the radio signals are picked up by the antenna mounted outside. This 18foot fiber glass reinforced antenna was donated to me by Howard Pletcher of Ft Wayne about 2 years ago and has been a central part of our feed ever since. In it's former life this antenna was used at Sears and also at the Ft Wayne Airport for the weather service. It is tuned for the 154-156 mhz frequency range for which it works quite well for 160-161mhz. For the time being, since I rent a house, the antenna is strapped to the deck post on my back porch. It is not the ideal situation especially since half of the antenna is in the branches of the tree which does hurt reception, but it does pretty well none-the-less. The feed line is RG6 Quad shield coax to the lightning arrest block and then into the house on regular RG6. 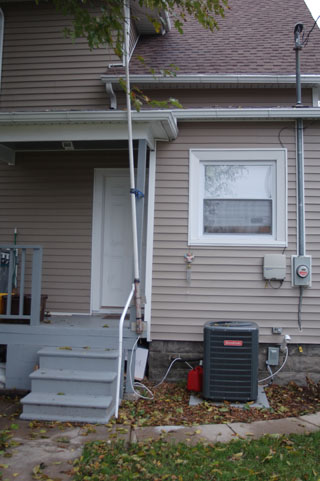 Once inside the basement the antenna feed goes through a splitter an each leg of the splitter goes to each radio. The main radio or right speaker on your computer, is a Radio Shack Pro-2046. It scans all four road channels in the Ft Wayne area. This scanner is on the bottom in the photo. The top scanner, a Pro-2026, scans the secondary channels such as the NS yard, Triple Crown and CF&E frequencies.

The audio from the scanners is fed into the computer via a homemade cable I made up that combines both outputs of the scanners and feeds it into one connection with utilizing seperate L-R channels. 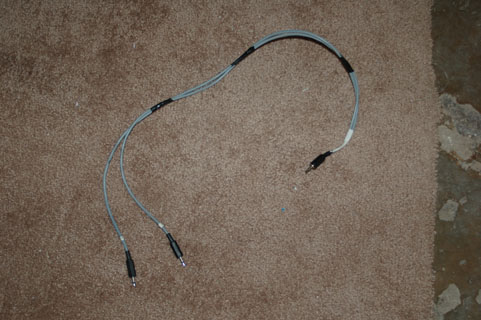 The actual server consists of a used IBM computer that I got from work. It and two other computers were about to make an untimely trip to the dumpster one day so I asked if I could take them home. This one includes an Intel Celeron 433mhz processor, 128mb ram, 8gig hard drive and runs on Windows 2000 Pro operating system. The monitor i picked up a year ago at the Ham Fest for $10 and it works great. 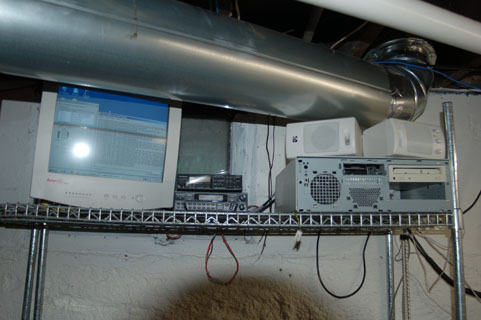 Now a look at the software. To get the audio to you requires two pieces of software. The first one gets the audio from the Line-In jack and turns it into usable stream data. The second takes that data and connects the user with the stream, basically acting as a "middle man". The first part is an extension of the program Winamp. The first screen shot is the menu where you select the input source. From here you can do many other things like acting as a DJ using the "push to talk" button and use a hand held mic to speak live. This feature we obviously do not use, although I have used it once when I was getting ready to turn the server off and wanted to warn the people that were listening. Probably freaked them out hearing my voice through their computer 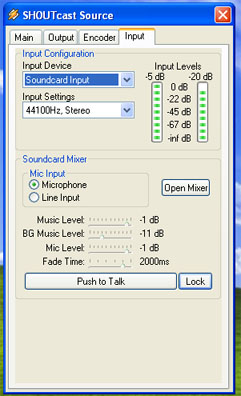 Next we tell the software how we want the audio encoded. In this case we want the audio as a Stereo stream so that the scanners come across on seperate channels on your PC. Since we're not streaming music and it's just a rough scanner audio, we don't need very high quality audio. This just takes up lots of unnesisary bandwidth so this setting is set at the lowest, 40kb per second. If I wanted I could setup multiple streams at different bitrates. This would be more critical if we were serving say video like a webcam. This way users on slow connections could use a lower quality stream while higher end cable connections would select the higher quality, higher bandwidth stream. But for this type of service, you wouldn't notice much difference. 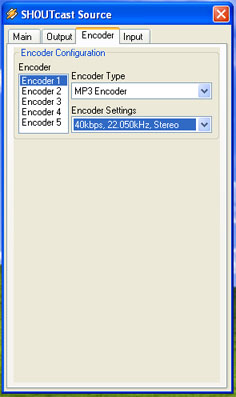 Third is the output settings. This is where the program is configured to determine 'what' to do with the audio we've setup for it to stream. Now in our case there are two configurations for this. The first is for the connection that you connect to when you use the address http://fwaudio.dyndns.org. Where it says "localhost" it is basically telling it that the output program is located on the same computer. We also send a stream to the servers at RailRoadRadio.net where the same audio is redistributed through their servers. 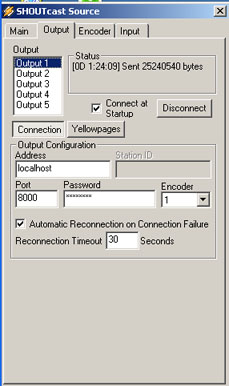 The last menu screen shows a quick synopsis of all the streams that the program is providing. Here we can see that both the local stream and the railroadradio.net stream are up and running. 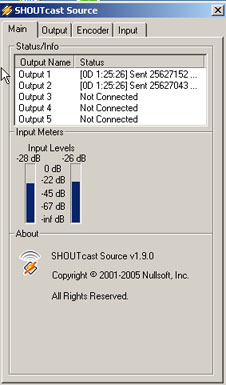 Now onto the second piece of software that connects you to the audio data. This software is called Shoutcast and is the choice of most audio stream operators. An addon is available to pair it with the Winamp software to make a seamless operation between the two. Some configurations need to be made here just as the port number to feed through, the number of connections allow, password to connect to winamp and other misc info. The window shows a log of all the connection made with the audio feed and the lower right hand side shows the current number of users connected. 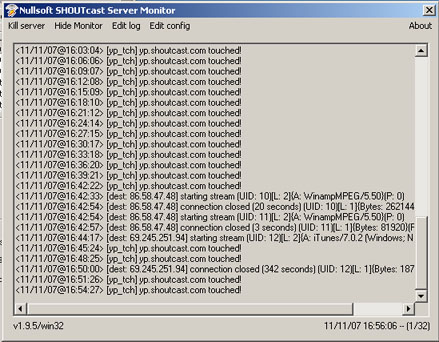 Beyond this there are some changes that have to be made to the network router to allow everyone to connect to this server because it sits behind a firewall. Basically speaking I have to "poke a hole" in the firewall that allows you to get through and connect to the server. At the present time there are about a dozen such holes in my firewall to allow audio, ATCS and other server connections through.

Hopefully this has been easy enough for everybody to read and understand and I havn't totally confused anyone with it. Feel free to ask if there's anything you'd like to have expanded apon especially if you're looking into setting up an audio server of your own.
Greg Lavoie - Webmaster
Top

A day to pause and remember....

BREAKER, BREAKER, that Howard is one "good buddy". BTW, I want to wish all of you RR guys out there that are veterans a hardy thanks for your service to our country, and hope you have a great Veterans Day.

GREAT JOB, GREG, THANKS FOR THE ENJOYMENT WE ALL GET FROM THIS SITE. IT SEEMS LIKE I NOW HAVE MORE VOLUME THAN BEFORE.
PS: IT SURE MUST BE LOUD UP THERE TO HAVE THIS MUCH SOUND 900 MILES AWAY. YAH !

I just turned it down a smudge, let me know what you think.

Thanks for the comments guys
Greg Lavoie - Webmaster
Top

Out in the open

Don"t get around much anymore...but, just happened to venture by the ACWMC today. Hey Greg, was wondering if that big "float boat" they are building across the street is going to be your new home of "cookery delights"??? Will you be leaving the wonderful downtown arena for greener pastures, or is the "company" going to keep both facilities?
If you move, how will you see the tracks from way out there?
Top

No D.L., I have no plans to go out that way any time soon. It's going to be IPFW's playground and I really don't have any patience for that sort of thing. My hotel has absolutely nothing to do with the one up north either. Before our building was sold and stripped of the flag we were owned by the same company that still owns the Hilton downtown. Now with the new owners they decided to drop the Holiday Inn flag and change to a Clarion brand.
Greg Lavoie - Webmaster
Top
Post Reply
7 posts • Page 1 of 1